History has always been a fascination for me from my early years.  My interest in human emotions and behaviour will be better known to the readers of my website.

What about putting the two together?  I need to draw another Road Map.  Through this safe experiment, I can demonstrate how the Johari Window works in the real world and am going to connect some dots for myself.

Even if my story is of limited value to you, consider how the process I describe might work for you as well.

So what is the process that makes up my small, safe experiment?  Much of it stems from an immediate realisation – some thoughts that came to mind at waking recently – and my recall on some dream I had. I do not recall dreams as a general rule so I am aware a lot of potential for learning fades away quickly

I have already said, I am a fan of the American Singe-Songwriter, the late Harry Chapin. On a few occasions, I have to take comfort from a line in one of his songs that goes something like “If you do not dream when you are awake, there is no way for them to come alive“. I I call this day-time dreaming: self-reflection. When I dream, I can complete a large experiment in a flash; not so much a small victory, as a sudden insight. . Despite what I say elsewhere, the learning can be immediate and contain no obvious ‘pre-contemplation’ as Prochaska and DiClemente put it. Sometimes that immediate learning can prove significant and long lasting, but – other times – it has the appearance of being significant and only fades into the mundane.

The thing is: how to build on the insight and remain aware of the potential for a defeat when an insight lacks substance?

Here, again, I refer to the illustration on the ‘scenic route’.

Once I step outside the Window of Tolerance (WoT), my journey can lead to victory or a defeat; even the appearance of a victory that – in time – ends up as a defeat. Time alone gives us an answer. and so, once again, outcome – obtained only through the passing of time – gives me a result but the passing of more time may produce another outcome. That may confirm the victory as a victory, or lead me to re-assess the outcome as a small defeat.

Once I am on the ‘road’, I have another chance to assess the progress I am making.

The source of all this?

around a feeling state of tenderness and a moment of forgiveness

Finding myself ??? and travelling to where?/

A time to reflect and do soem energetic writing

Now a word of caution

A lot of ‘founders’ of movements tell a similar story to one thone i am including here, on this page. The exerpeience – life-changing, for some – is often used to crsdat a sense of our own importance, of our place in the world. This leads to ‘movements’; Archimedes and his bath,Shaprio and her walk on the beach ‘discovering’ EMDR; St PAul on the Road th Damascus, MArtin Luther King having his dream,  Isaac Newton having an apple drop on his head so they say), and Fleming noticing a mould in a petrie dish in his lab (by the way, did you know other people did the real work on penecillin?), Crick an dWatson finding the ‘double helix’ that became the basis of genetic science. who else???

The point i am making here is the success tha individuals had – after any revelation – was not acheived by an inisght but a set of chance factors that placed Florey’s work in the back shelf, let Rosamund ??? fade intot he background and let Darwin ??

I cannot even claim that these seemingly chance events arouse from badly distributed resources (see page) although it is likely that ‘connections’ led some people to make more headway than others.

Neuroception: process of tagging together seemingly disparate leementf of information,.

Implicatinos for small, safe e xperiments and some practical possibilities.

I am back to recording. None of this informatino  this page would have been forthcoming had i not eben about to jot down some key thoughts immediately. I do not knwo about you, but I rarely remember my dreams -= when i do , they dfade quickly so much is lost unless I write up quickly.

Meaning: discount matrix; stuff in Perosnal abiliites – not in options or signifance any longer.

YET, at the same time, signifance will be revisited time after time. What is significant at one time, may seem less so at another.

Hari, in his book Sapiens, warns us about this fallacy. saying:

“Every pointin history is a crossroads. A single travelled road leads from the past to the present, but myriad paths fork off intothe futuree.  Some of those paths are wider, smoother and better marked, aand ar thus more liekly to be taken, but sometimes history – or the people who make hisory – take uepxected turns.   ….”

When hisotirans describe these paths to explore HOW a particular outcome arose. They cannot describe WHY is not so feasible. Why assumes causal connections and linking occurences may, or may not be related causally. . Perhpas they are simply close together and APPEAR to be causal, when they are not. That is the hindsight fallacy: the tendency to se a link between one event and another and gone on to assert that one event caused the other.  This confusion of thinking would not matter in many situations,  but it can be exploited???

This may be better appreciated if we consider the chicken-and-egg dilemma: 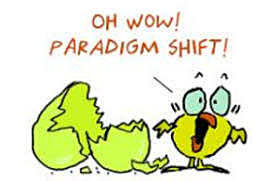 1962 book The Structure of Scientific Revolutions

Value the connections you make

Explore the links between experiences and hisotry, but stop shor at cause.